My first contribution to the Big Builders project was a model of 79&PARK in Stockholm. For my second model, I have chosen one of the most iconic designs by Bjarke Ingels: The Mountain – a residential structure in Copenhagen completed in 2007. 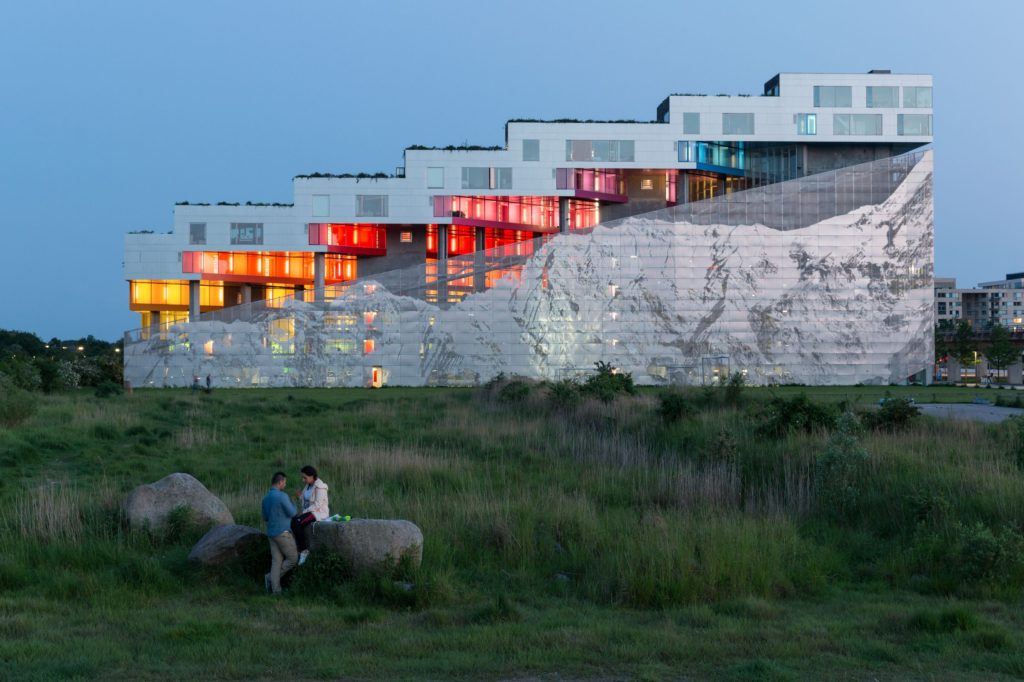 How do you combine the splendours of the suburban backyard with the social intensity of urban density? The Mountain Dwellings are the 2nd generation of the VM Houses – same client, same size and same street. The program, however, is 2/3 parking and 1/3 living. What if the parking area became the base upon which to place terraced housing – like a concrete hillside covered by a thin layer of housing, cascading from the 11th floor to the street edge? Rather than doing two separate buildings next to each other – a parking and a housing block – we decided to merge the two functions into a symbiotic relationship. 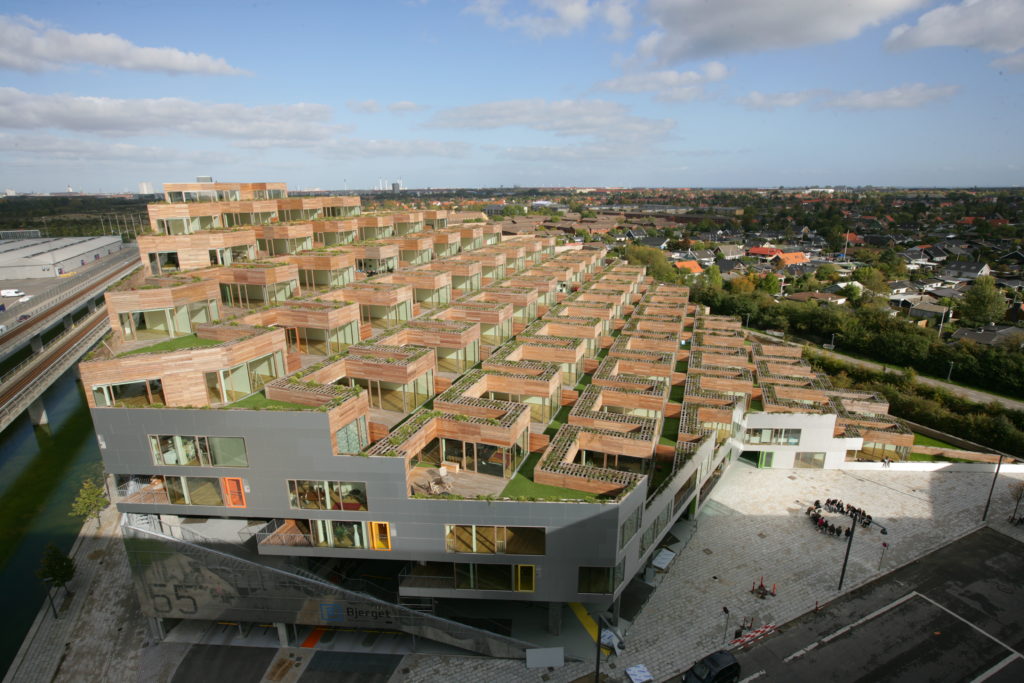 With a parking garage, terraced housing on top, a picture of Mount Everest on the facade, multiple colors on the various levels, lots of greenery and all apartments turned 45 degrees compared to the outer walls, this structure is a great challenge to build in microscale using LEGO bricks!

Having received all background material from BIG (floor plans, pictures etc.), my first step was to experiment with some of the basic elements of the model: The height of each floor, size of each apartment, available window elements and colors. The real building is constructed on a grid of columns separated by 10 meters and deciding on the model grid size would define the scale of the entire building. Using an 8×8 plate for each of the 10×10 m grids results in a distance between each floor of almost exactly 7 plates, corresponding to a plate for the floor and a 1x2x2 Window Frame for all the windows. The scale becomes 1:156 and also fits perfectly with the trophy figures as seen on the prototype below where two apartments have been stacked on top of each other at an offset.

In the previous model of 79&Park, the distance between the levels was only 5 plates (1:225) so the MTN model will be substantially larger. The ground plan is 80 x 96 studs (including surrounding pedestrian areas) and the model will be built and transported in one piece. 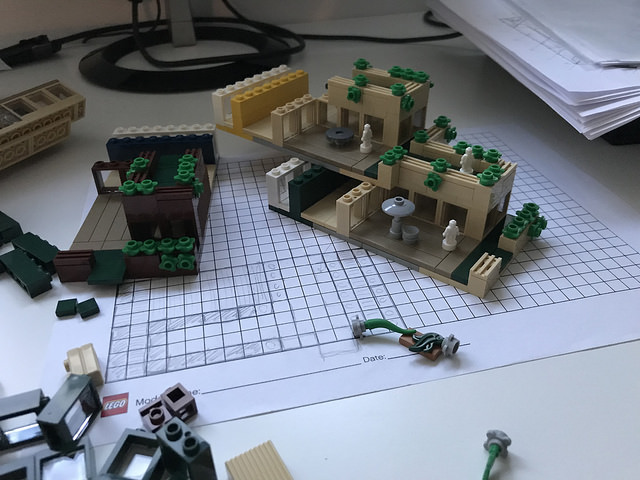 As for the color selection, the only real decision was the color of the wooden facade. Although Dark Tan would have matched the actual color better, Tan was selected because of the larger part selection, especially the 1x2x2 Window Frame. Dark tan is used for the terraces for contrast. In the picture above, I also tried regular Brown for the wooden panels, but that was simply too dark.

The rest of the design process was done with pencil, ruler and checkered paper and some help from a LEGO mosaic maker program for the facade picture of Mt. Everest (more on that in a future post). 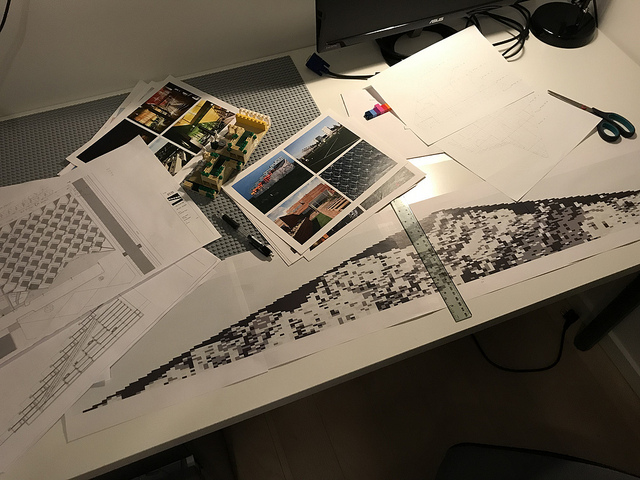 Having received the bricks for the project (including a lot of bricks and plates with a 45 degree angle included), the construction has now begun, starting with the base and the parking garage. So far, it looks pretty grey. 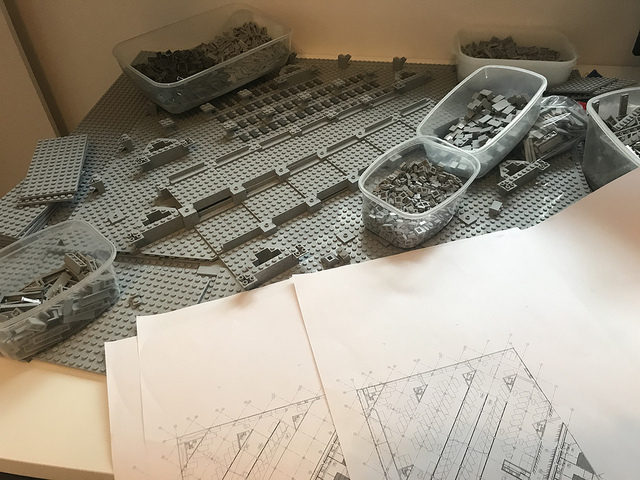 The 10x10m grid can be seen on the drawings in the picture above and the picture below shows the real life parking garage. 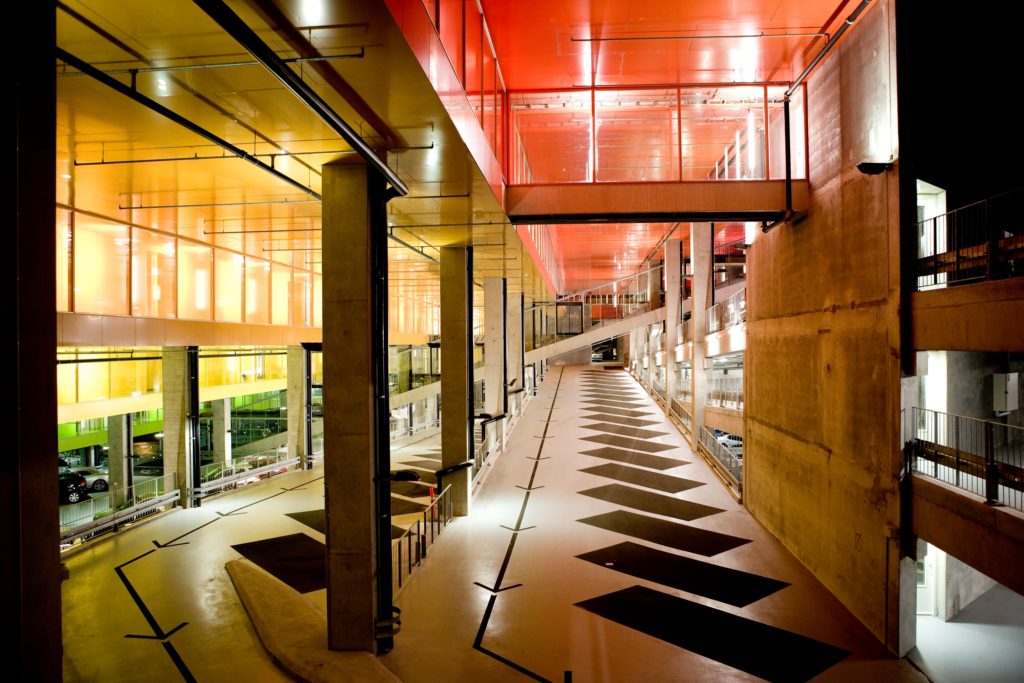