Anne Mette Vestergård (a 49-year-old LEGO Fan from Denmark) has built this model. 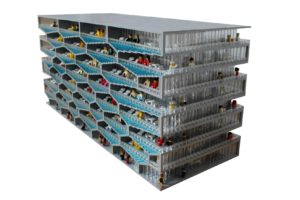 Anne Mette is from Denmark and has never been in Bahamas and never seen the building at Albany Marina Residences. However, she was very fascinated by the pools on each balcony. “It must be a dream to have you own pool in you apartment, and at same time you are relaxing in the pool have a fantastic view over the ocean.” 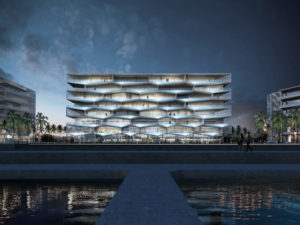 The honeycomb structure and all the glass was a challenge to transform to a LEGO Building. When you build with trans-clear LEGO bricks, it is very visible to see the joints between the different bricks and plates. Looking at the drawings for the building, it looks like there was vertical joints in the reel glass facades but no horizontal. Because of that, Anne Mette decided to use 1x2x5 trans-clear bricks as the basis for the big glass facades, to avoid to many horizontal joints. This decision determined the scale of the building to 1:75, which did not fit to normal minifigures. 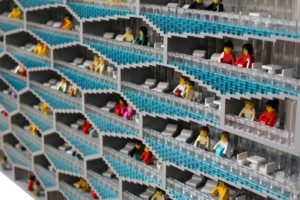 Building in this scale the building is more than one meter long, and it seems ok to choose to build the honeycomb structure up by plates. It makes it very visible that the building is built of LEGO bricks but it was already visible by the glass, and seems to fit well together. 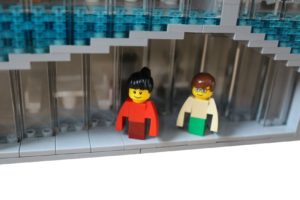 When building in scale 1:75 a standard minifigures are too big and especially to wide. The figures normally made for scale 1:100 as seen in Lasse´s LEGO model of LEGO House is too small. Therefore, Anne Mette decided to create her own figure. Reusing the minifig head and hair but creating a thinner and shorter body for it.

Anne Mette made two versions, a standing one and a sitting one. 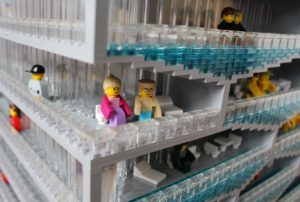 The design of furniture

A LEGO model of The Faroe Islands Education Centre will be build by Helgi Toftegaard.

The new Education Centre in Marknagil is situated on a hillside on the outskirts of Torshavn, to serve as a base for coordination and future development of all educational programmes in the region. As the largest educational building project in the country’s history, the institution combines Faroe Islands Gymnasium, Torshavns Technical College and Business College of Faroe Islands in one building, housing 1200 students and 300 teachers.

Located on a hillside, 100 m above the sea level with a panoramic view overlooking the sea, mountains and harbor of Torshavn, the project is designed as a vortex, radiating out towards its surroundings while at the same time focusing in on the school’s inner landscape for learning the lessons of life. Each institution is organized as a school in a school with ideal conditions for each, while creating a sense of community for learning and life. The generous surroundings provide unique opportunities to shape the school from the inside out ‐ as a functional sculpture formed by the schools internal needs.

Each school will function independently comprising the space it requires with room to grow in the future. Additionally by combining the three schools under one roof they will create the synergetic effect of a vertical campus. At the school’s heart is an open rotunda space, creating a natural gathering point across floor levels and academic interests. A stepped interior reflects the undulating Faroese landscape with its alternating plateaus,stairwells and terraces serving different social and academic activities.

More information can be found here: FAER on BIG website

My contribution for the Big Builders project will be a LEGO model of 79&PARK, a large residential building currently under construction in Stockholm, Sweden.

A few renderings and model pictures are shown in this post, but a lot more pictures and information on the project can be found here: 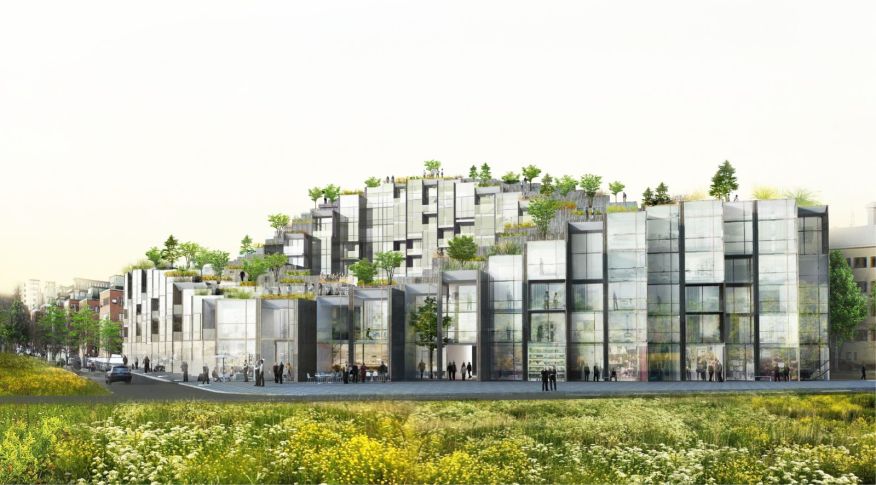 …the massing is visually reduced through a language of pixels, scaled to the human form. This manipulation not only allows for a more organic expression, perfectly reflecting the surrounding landscape, but also provides a way to accomplish the building topography in a controlled and inexpensive way through the use of prefabricated units of standardized sizes. Naturally, the use of pixels in standardized sizes also makes 79&PARK a wonderful subject for a LEGO model!

When designing a LEGO architectural model, one of the first decisions is obviously the scale which determines the overall size of the model. In this case, the size of the individual pixels becomes a natural anchor.

A pixel size of 1×1 stud would be the smallest possible, whereas a minifig scale model (corresponding to LEGO play sets) would require a pixel size of at least 8×8 studs. Such a model would be enormous. As the length of the pixel side is doubled, the overall volume of the building grows by a factor of 8 and the number of bricks needed increases by roughly the same.

I settled on a pixel size of 2×2 studs which gives a model of about 2 standard LEGO baseplates (32×32 studs) in size. At this size, it is still possible to create details such as balconies, windows and vegetation. As the pixels have a length of 3,6 m in real life and 2 LEGO studs measure 1,6 cm, the scale becomes 1:225.

The distance between the floors of the building is 3,1 m so each pixel is almost cubic. At the selected scale, the height of each level would be 4,3 LEGO plates. Rounding up to 5 plates (= 2 studs) makes the pixels cubic and opens up for a vast number of construction possibilities using SNOT techniques (Studs Not On Top). This is the main design compromise making the LEGO model slightly taller than the real building. The basic pixel size (2x2x2 studs) can be seen in the picture below. 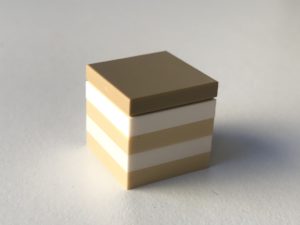 What color is this building anyway? Well, looking at the many renderings and models it is clear that the amount of (sun)light, the reflections and the viewing angle have a lot to say. Most of the pixels have a large window on one facade and wooden lamellas on the other. Moreover, the lamellas are open in conjunction with the balconies, which gives a different color tone when seen from afar.

For the wooden structures, the LEGO color Brown is both too dark and too shiny. The color Tan is too light but Dark Tan works well, although it has limited parts available. For the open lamellas at the balconies, I am using a Brown grille brick to make is visually distinct (also, it does not exist in Dark Tan). Once the model is complete, I may change this color to Grey (LBG), Dark Grey (DBG) or Tan depending on what looks best. Finally, the windows will be Tan to contrast with the wooden lamellas.

The pixels in the facade (555 of them) come in two main designs: Window and balcony. Since most of the facade pixels are offset from the next row, the construction of the pixel does not have to be strictly cubic. This allows me to use the 1x2x2 Window sideways for the window pixels providing very thin edges around the window. The concept for the balcony pixel with the open wooden lamellas is also shown on the picture below. 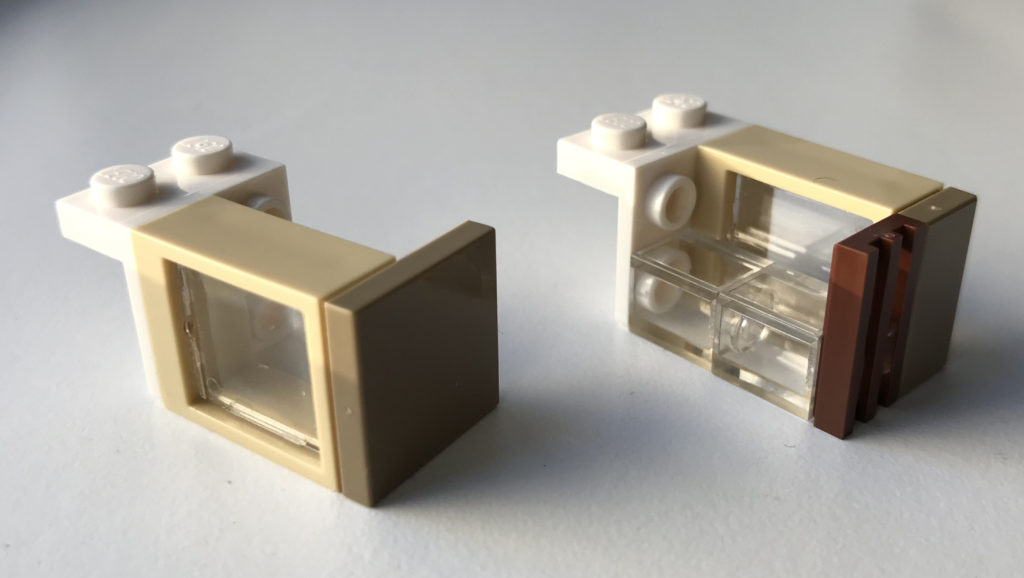 When attached to an inner frame, the facade pixels overlap and become cubic as seen in the illustration below. 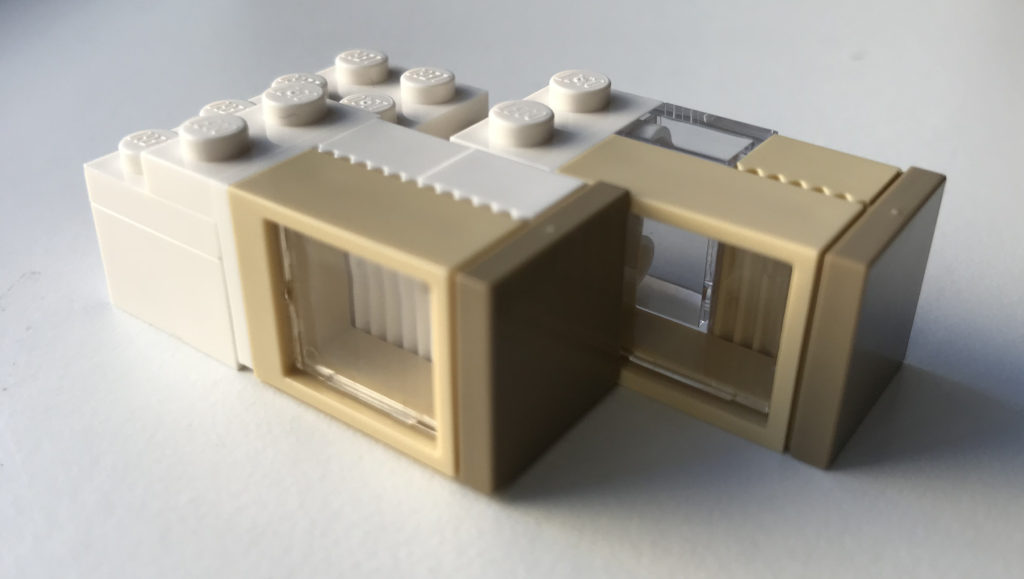 As the model will have no interior, I use different colored profile bricks to replicate vertical and horizontal blinds behind the windows. This also adds some variation to the facades of the building. 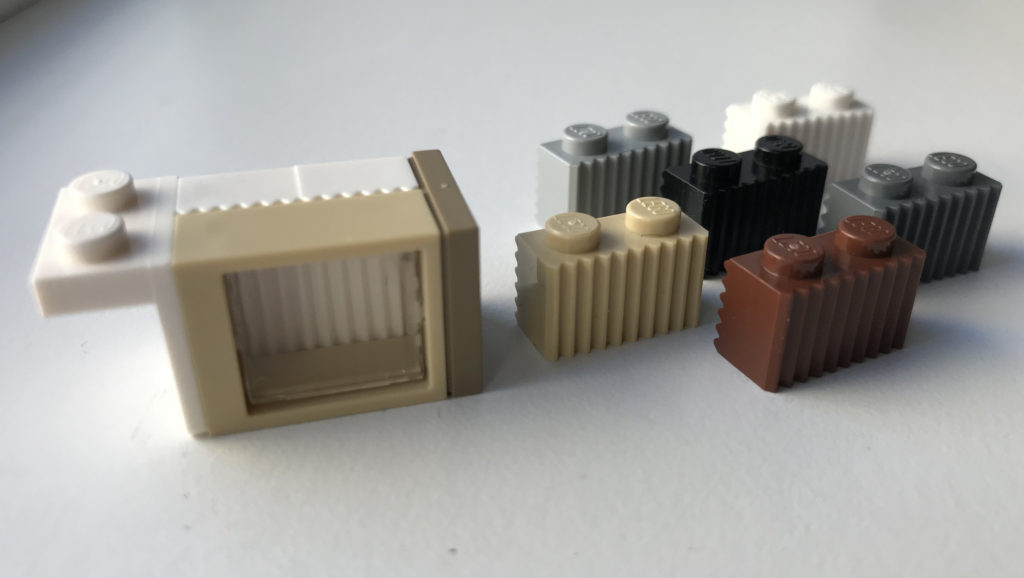 The construction of the LEGO model is now underway. The picture below shows the inner skeleton of the building (in white) with the first pixels attached. In the background, an early prototype with different colors for the open wooden lamellas can be seen. This prototype was used for estimation of the number of bricks needed. The detailed building plans are kindly provided by BIG and are used extensively in combination with the available renderings. 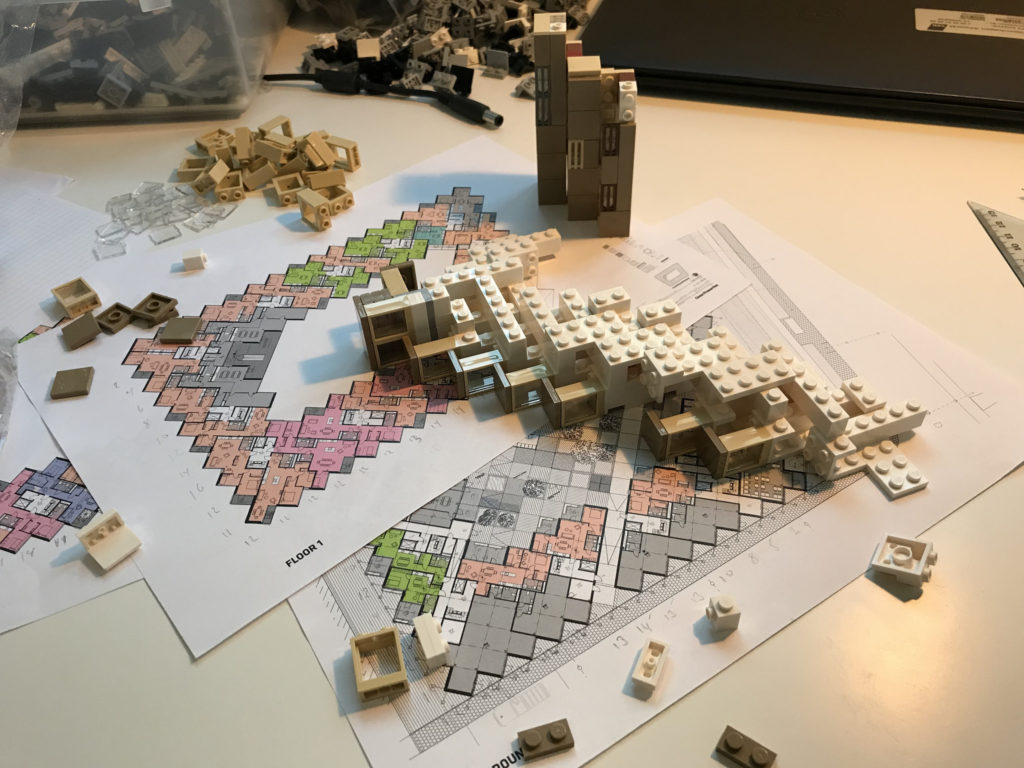 The model is built by Lasse Vestergård (a 22 years old LEGO fan from Denmark).  He visited LEGO House in Billund for the first time in August. In September, he began building the LEGO model. 3 months later, the LEGO model was finish. Lasse decided to use the same colors as in official LEGO House LEGO Architecture set no. 21037. 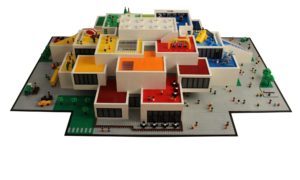