I have built Mount Everest in LEGO! Well, just a mosaic but still…

I am quite satisfied with the result. Compared to the instructions from the mosaic maker program, I have substituted about half of the very light grey 1×1 plates with transparent 1×1 plates. This was done partly because of limited supply, partly to reflect the partial transparency of the real-life wall due to the raster effect described in the previous blog post. Also, the dark bluish grey plates representing the sky have been replaced by dark transparent plates and tiles since this part is in fact the area with the highest level of transparency.

As with all mosaics, the result looks better from a distance as seen on the picture below.

During the construction, I followed the instructions meticulously using a ruler, a pencil and temporary tiles to indicate each 10 studs. Where possible, I used larger plates and bricks to keep the wall together. It is not sturdy, but not too fragile either.

I have now moved on to the final touches including the surrounding street and canal environments.

Time has come to start building the main feature of the model, the 80 apartments. The remaining gray bricks from the parking garage have been put aside making room for bricks, plates and tiles in tan, dark tan and dark green.

But before construction can begin, there is a boring job to be done putting glasses in several hundred tan windows.

The ground floor consists of just two apartments. I might return and adjust the level of greenery later when I see how it works on a couple more floors.

Here, level 1 and 2 have been added and the repeated pattern of apartments start to become visible.

For reference, here is a picture of the same section of the actual building.

Only 70 more apartments to go!

The YouTube video below presents the final model, comparing the LEGO version to the visualizations of the actual building. I am very satisfied with the end result.

Below are images with various angles and light. I particularly like the last image imitating the sunset with large shadows. 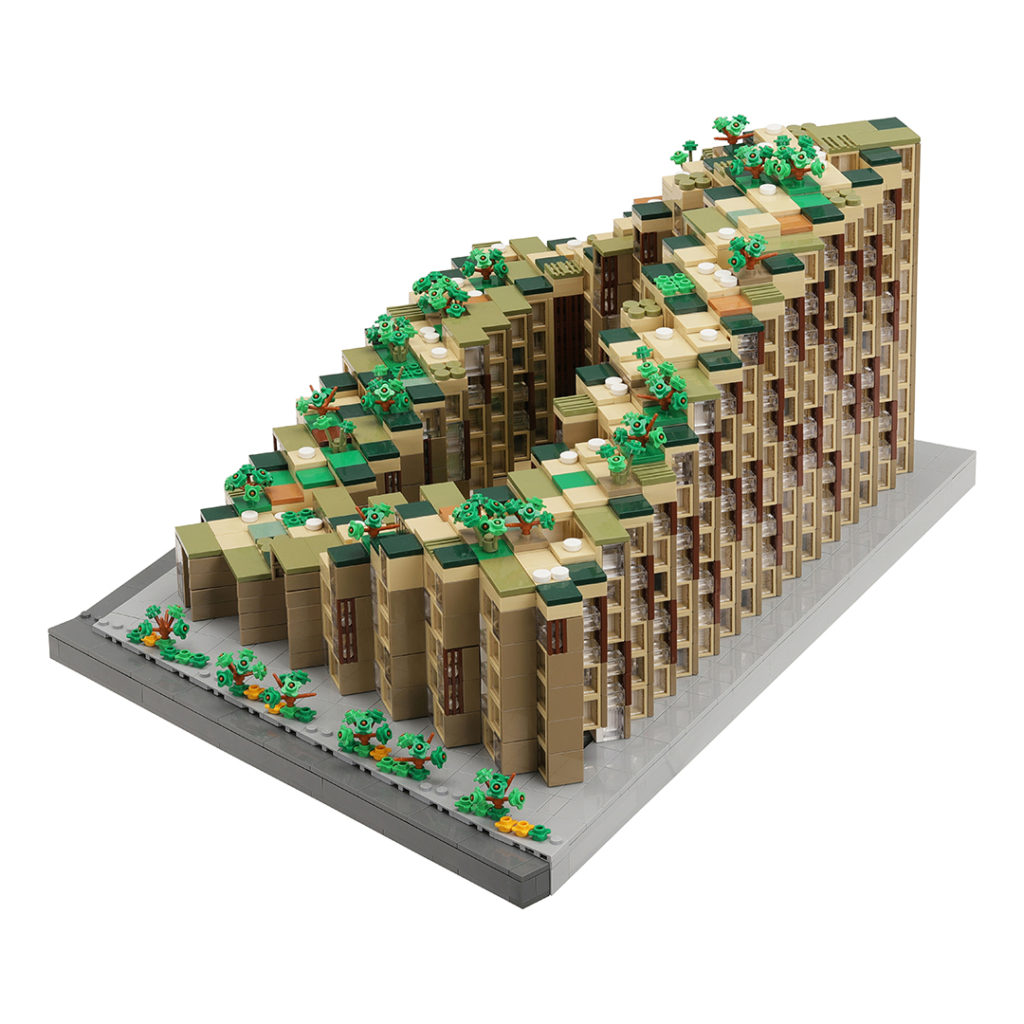 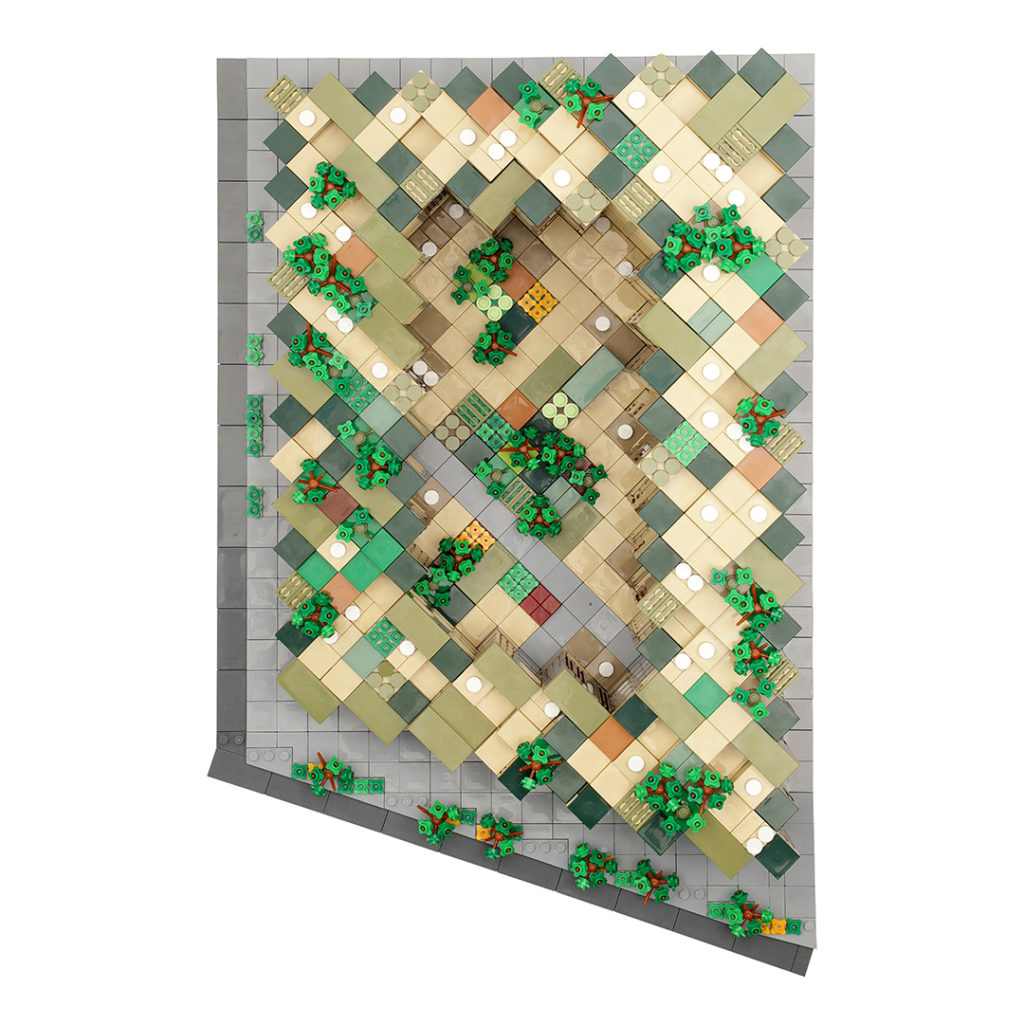 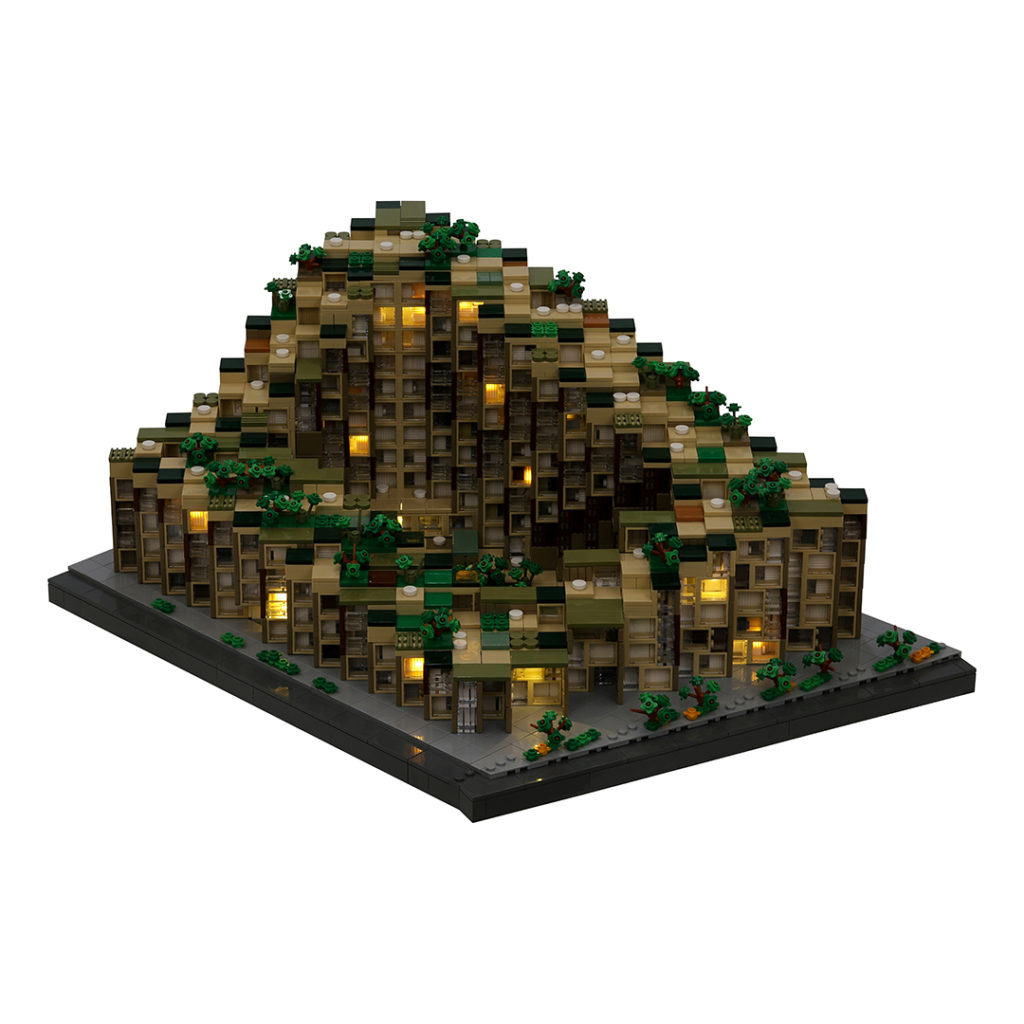 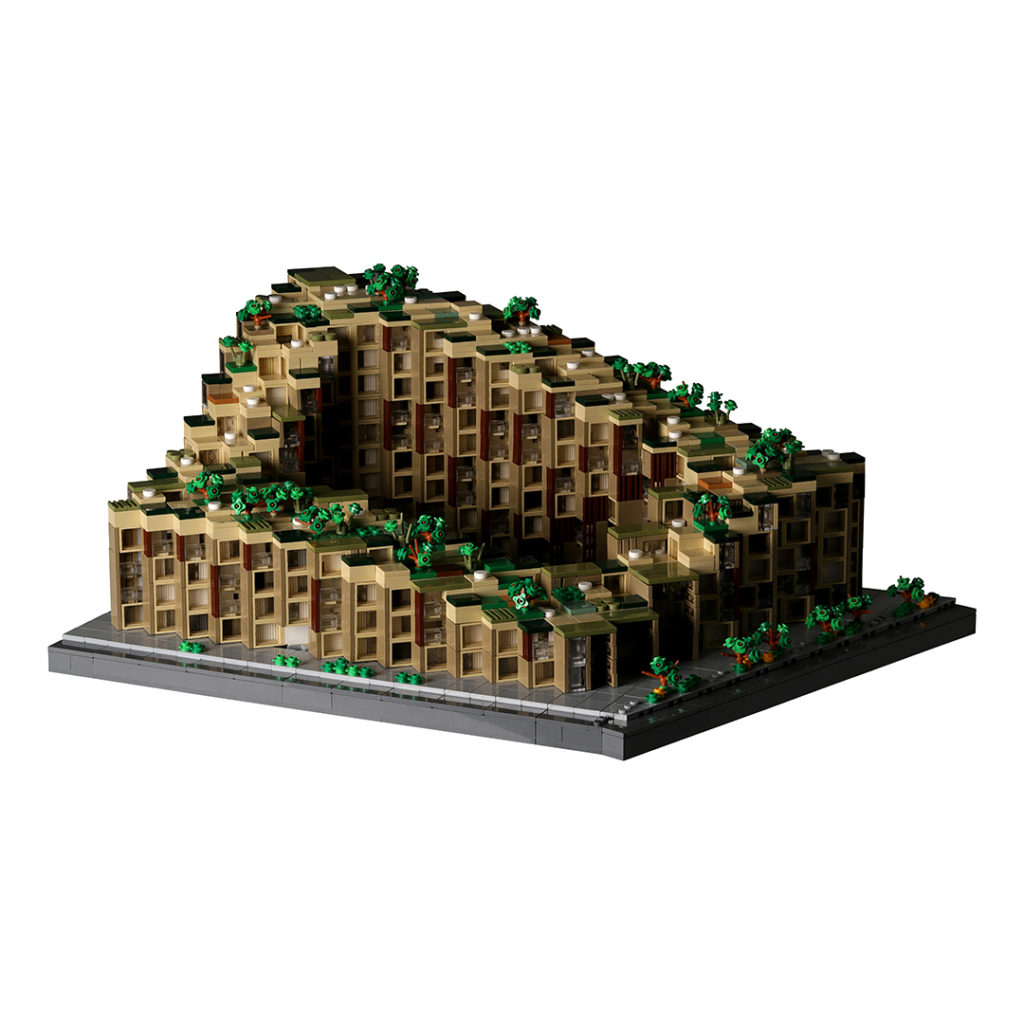 The professional images were shot at the studios of Trendshots.dk, who specialize in product images for webshops. The pictures below show the process. Each of the final pictures is composed of three images with varying focus and has been cleared of any background noise and clutter. 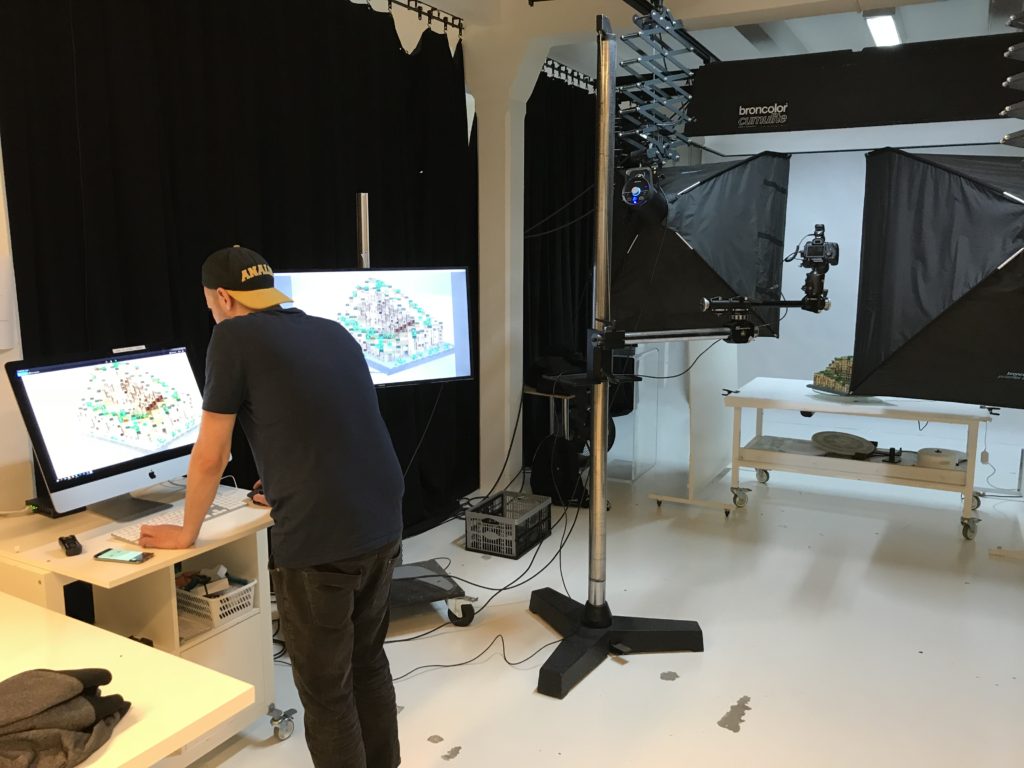 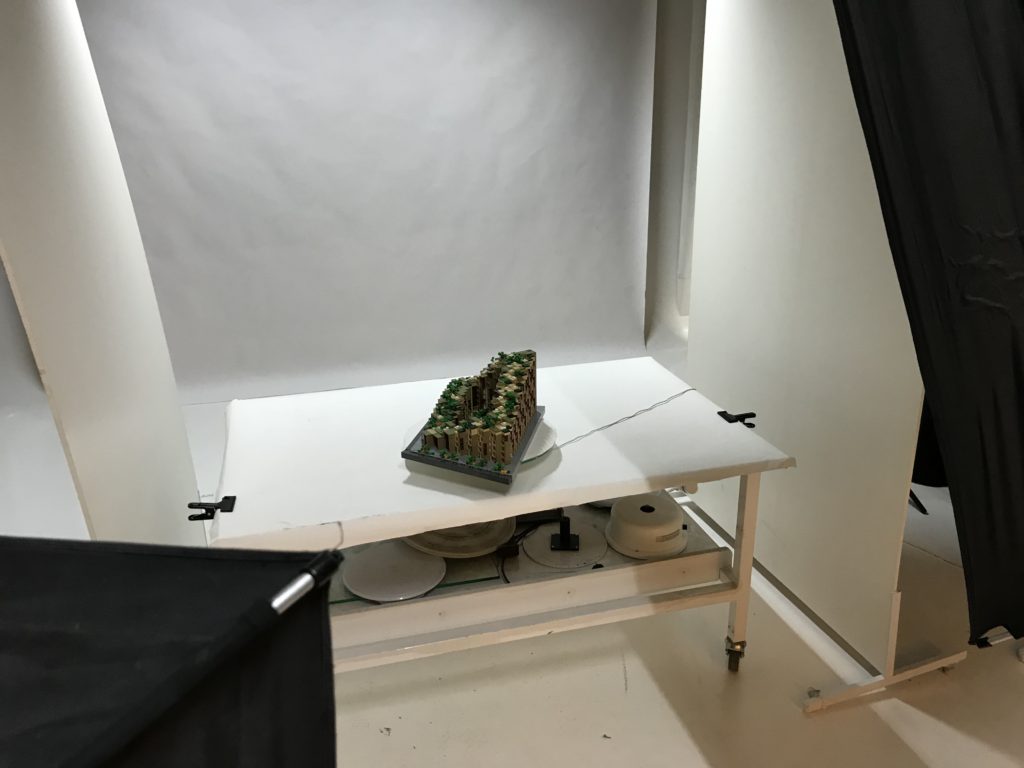 As can be seen on the picture above, the model sits on top of a turn table which allowed us to take a 360 degree image of the model. Click the image below to see the model turn.

The model is currently on display in the foyer of LEGO House in Billund alongside all the other buildings in the BIG Builders project. It can be seen in its own display case in the back of the picture. 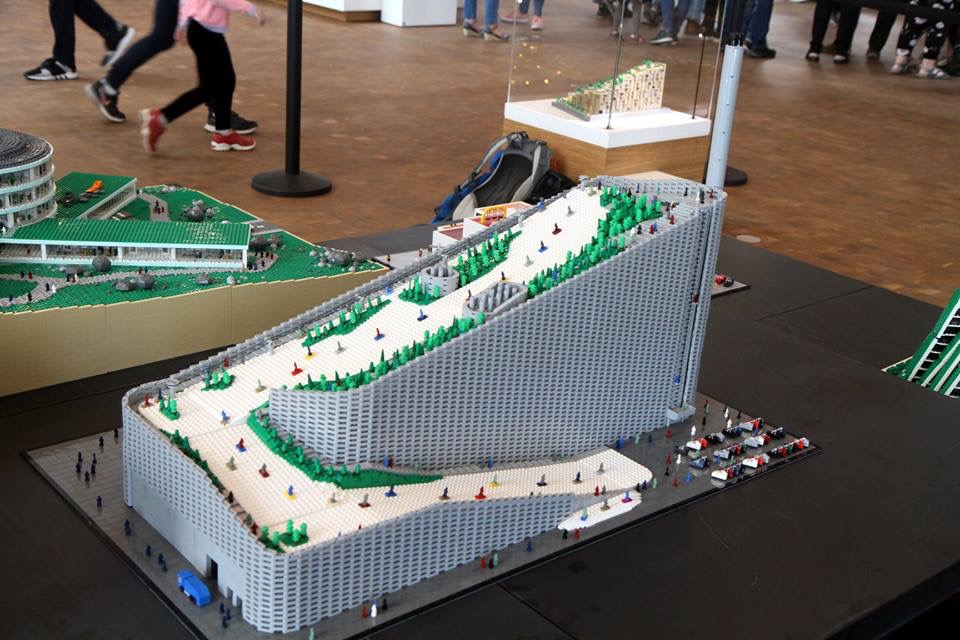 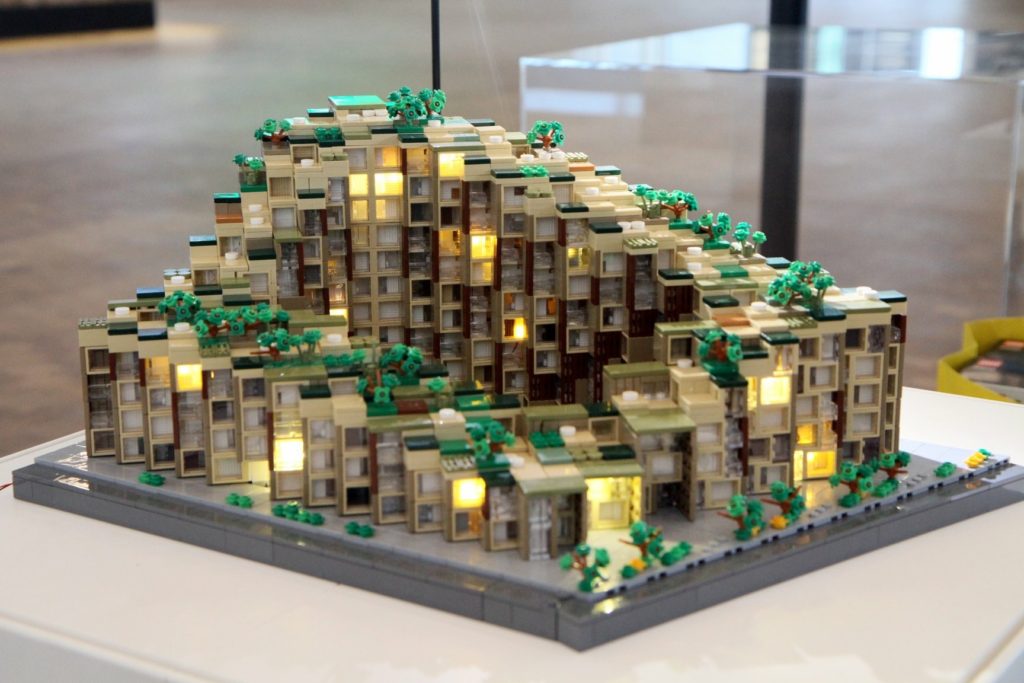